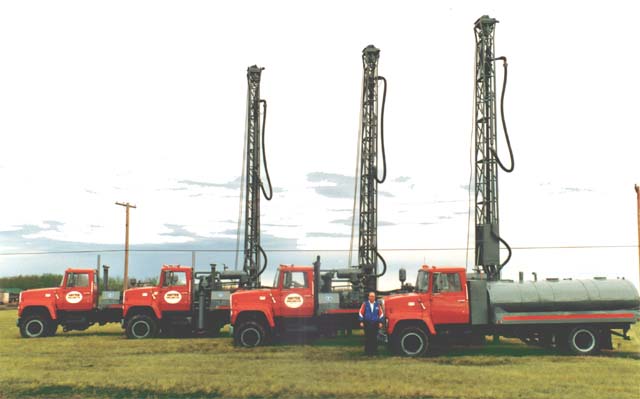 Hayter Drilling Ltd. was established in 1958 by Dale and Mae Hayter. The Company initially was established to satisfy the rural needs of the province. As it grew it diversified, and involved itself in other facets of drilling operations. In 1972, the firm incorporated, and continued to expand. Since 1980, we have been actively involved in Northern Saskatchewan, as well as the Northwest Territories. Currently we specialize in commercial water wells for cities, towns, hutterite colonies, R.M.’s and irrigation projects. However, since our inception we actively continue to drill small and large diameter bored wells in Saskatchewan for farm operations, residential and cottages.

Our testholes and E-loggs are basis for all our designs and installations to suit the particular client requirements. We have also been involved in bulk sampling procedures for coal and diamond explorations throughout this province.

We have preformed a large amount of test drilling and monitor well installation work from 1972-1985 for the Saskatchewan Research Council. Reference on request.

From 1979 to present day we have drilled and designed many deep water wells in southwestern Saskatchewan for Hutterite colonies to suit their requirements. These wells range from 900-1,700 feet in depth. References are available upon request.

In 1980, we were involved with Esso Minerals at Midwest Lake, west of Wollaston Lake. The contract called for 12 inch holes to target depths of 700 feet. The method used was downhole hammer direct rotary, which was completed successfully.

From 1981 until 1995 we have been awarded contracts with Key Lake Mining Corporation (now Cameco Corp.). Their program has called for dewatering wells to diameters of 20 inches to depths of 350 feet. The contract also included pumptesting, special sampling services as well as HQ size coring. Recently for Cameco – McArthur River Minesite – installed casing in cement holes to supply cement to underground facilities of 530 metres below ground level.

During our 60+ years in business we have done multiple well projects for countless towns and municipalities. Hayter Drilling Ltd. has successfully completed wells of 16 inches in diameter, in various depths on our own consulting, along with pumptesting. Various wells have been completed from Beckie Hydrogeologists in Regina.

Also, Cominco Ltd. from 1982 to 1986 awarded   us contracts for dewatering wells at Pine Point, NWT. The program consisted of 17½ inch holes drilled to depths of 550 feet. Techniques included air drilling with foam additives. A program which posed many problems for other contractors was completed successfully and long before its deadline.

A further drilling program was completed in 1986 for Atomic Energy of Canada at Penawa, Manitoba. The contract called for 1,500 to 2,300 foot holes in the percambrian shield.

In the late seventies and early eighties we drilled thousands of feet of HQ size core for the preliminary engineering work at Nipawin Hydro-electric Power project. The contract included installation of monitoring wells and piezometers in the glacial deposits as well as bedrock. The other facets of work performed were shelby tube and split spoon sampling.

In the fall of 1988 we were awarded a contract with PCS Patience Lake which involved drilling holes 24 inches in diameter and installing 20 inch casing with a .469 wall to depths of 400 geet. These holes were surface casing for oil rigs. Various wells have been completed with Beckie Hydrogeologists in Regina.

Transgas has done various potable waterwell programs for washing deep natural gas storage caverns at Rocanville, Prudhomme, Grandora and Landis, SK which we have been involved drilling of the potable wells and pump testing.

More recent history of Hayter Drilling Ltd. has been in the making. We are proud to announce we have recently acquired an email address of hayterdrilling@sasktel.net.

Since Dale’s passing in 2009, son Marty is in charge of day to day field operations and Mae continues active in office operations.